Hi Linda, Thank you so much for having me on your blog today!

I was born and raised in Connecticut where I still live today. I’m married with two kids, and I work full-time for a software company that builds solutions for people in the Finance industry. It’s often challenging to find time to write, but it’s totally worth the effort.

I’m a planner, but I allow my plan to go off the rails if it seems like the right thing to do. I start off by creating a loose outline with all the major turning points of the story, then break it out into scenes. Once I start writing the actual manuscript, I don’t freak out if the story wants to veer off elsewhere. I readjust as I go.

Describe a normal writing day (or period, if you have other employment obligations)

My alarm goes off when it’s still pitch black outside. It’s so early my dog doesn’t even acknowledge it. I slip out of bed, make a large cup of coffee and head to my office. This is a spare room that my awesome husband converted into a writing den for me (yes, I know I’m a lucky gal J).

I proceed to write until it’s time for the kids to get up and ready for school. I get them moving and I get ready for the rest of the day, too. There’s a small window where everyone is all set and I don’t need to leave yet, so I sneak back into the office and use the precious minutes to my advantage.

Once time is up, I head to the day job. I’m usually too beat after work to go back to writing in the evening, but I’ll do it if I’m working on a deadline.

Yes! I write in a number of genres. The Crimson Curse is fantasy, a fairy tale retelling of Beauty and the Beast, but I also write YA, sci-fi, and contemporary romance. The one common thread in all of my writing is that I focus on relationships. So, whether my character is a cursed woman in search of true love, an aspiring ballerina who discovers she needs to save the world, or the President’s daughter who falls in love with a galactic garbage man, I try to paint a vivid picture of who is important to them in their world and try to show what they are willing to do for those people.

I am a pet person for sure. About three years ago, we rescued a brown and white Siberian Husky. A group of teenagers had found her wandering on the side of the road and took her to a vet. I have a friend who’s involved in helping animals find forever homes, and she told me about this one. My husband and I had another husky before this one, and we adored her. I wasn’t sure if I’d ever be able to have another dog, because I was so heartbroken when she passed.

For anyone who isn’t familiar with this breed, they are very head strong and super stubborn. It turns out this dog had two other homes before us and had been abandoned. My friend asked if I was ready for another dog, and if I wanted to meet her. We decided right away to take her home with us. We had a shaky start, and had to work through some issues because of her past, but it all worked out in the end. She is almost always by my side. It’s so rewarding to know that we saved her and were able to give her the home that she needed.

There are two things I hope a reader can gain from my stories. The first would be a chance to escape from reality for a bit. When I’m immersed in a good book, it’s as if the entire world falls away and I’m living in the story. It’s my hope that I can somehow do the same for others. The other thing would be for the reader to feel, to experience whatever emotion my character is feeling in that moment, too. If I’m able to invoke a spark of happiness, anger, or fear, then I feel like I’ve done my job as a writer.

Cursed and disfigured, Calliope must find true love before the final leaf falls from the Enchanted Tree. Being bound to her mansion on the outskirts of town leaves her with little hope.

Abandoned by his wife for a wealthy man, Bastian only needs one female in his life, his five-year-old daughter, Yareena. When she goes missing during a raging fire, fate brings him to a strange place where he encounters a woman wearing a golden mask.

An attack by rogues puts Bastian in Calliope’s care. As he struggles against pride and prejudice, Bastian can’t ignore his growing attraction to the kind soul behind the mask.

Yareena and the mansion staff do their best at matchmaking, but Calliope can’t reveal her darkest secret. Will Bastian discover her true beauty before it’s too late?

Calliope returned her attention to Bastian, grasping his shoulder with a gentle hand and giving him a small shake. When he didn’t stir, she considered how she could clean the wound without undressing him as he slept. She had never taken off a man’s clothing before, and she hardly wanted her first time to be when he wasn’t even aware of her actions. But, no other options seemed available. She started at the bottom button of his shirt, working her way up with trembling fingers, and spreading the fabric apart when the last of the buttons slipped free.

Her eyes roamed his upper body. While she was supposed to be assessing the extent of his injuries, she couldn’t deny the flash of heat that blasted through her at the sight of his bare skin.

She dipped a washcloth in the basin that Mrs. Widdleworth left on the night table, wringing out the excess water. As she dabbed at the gash near his naval, his vulnerability in that moment struck her in a way she had not expected. After their first encounter, she would have predicted his ego to get in the way, choosing to bleed to death in the cold rather than accept anything from her.

Although he suffered a serious injury, his daughter seemed to remain his utmost concern. Could his earlier ill-temper have been an unusual display? A behavior born out of fear for his daughter’s safety?

Maybe she had been wrong about him.

She pressed her lips together, allowing the notion to sink in as she dropped the bloody fabric off to the side, and proceeded to stitch the wound with shaky fingers. When the task was complete, she picked up a fresh cloth to use as a dressing. Relief washed over her as she inspected the area before covering it up. The slice in his flesh went deep, but not nearly as deep as she initially feared. She positioned the bandage and fixed it in place, her gaze catching a thin trail of hair that started under the center of his chest, following the way it continued lower down his body, and even further yet where it dipped beneath his trousers.

“It’s been a long time since a woman has laid her hands on me,” Bastian said, his voice rough.

Calliope jumped, heat infusing her cheeks. “My apologies if this offends. Marcus doesn’t fare well with blood. I had to care for your injury myself.” Her eyes met his, and to her surprise, no anger seemed to stir there.

“I was only teasing.” He swallowed hard, appearing to bite back the immense discomfort he had to be feeling. “Thank you.”

She inclined her head. “You’re welcome.”

“I shouldn’t have been so terse with you earlier. Yareena is my life, and when I couldn’t find her, well…” He reached for his face, pressing the heel of his hand against his jaw. “I lost my sense for a short while. I apologize.”

Melissa J. Crispin lives in Connecticut with her husband, two kids, and an adorable Siberian Husky. She spends her days in the corporate world, and pursues her passion for writing in the late nights and early mornings.

From micro-fiction to novels, Melissa loves to write stories in varying lengths. But, no matter the story, it’s almost always about the romance.

Or click here to connect with contest on Rafflecopter:

Roane Publishing is giving away three eARCs of

Light a Candle for the Beast! 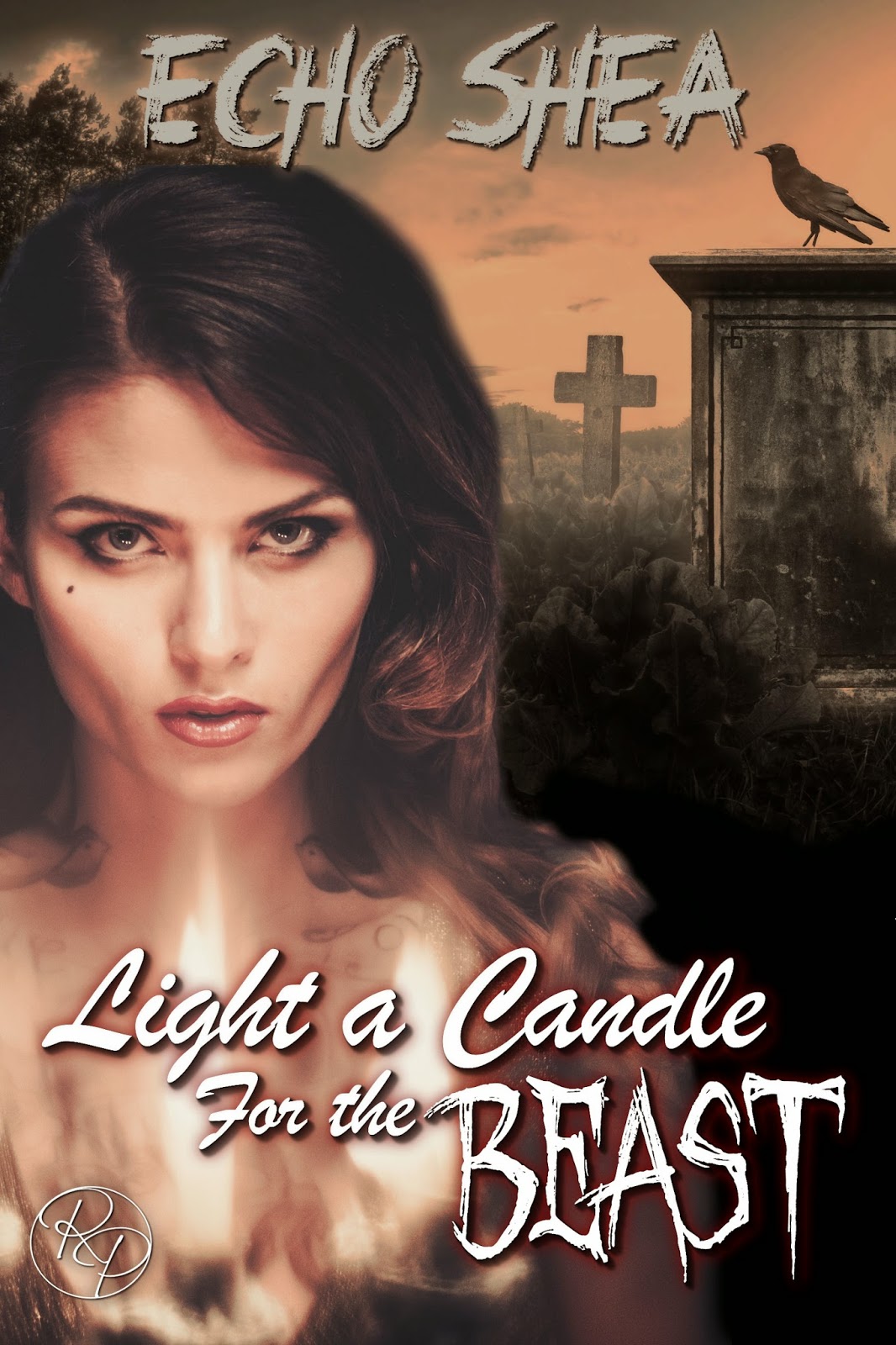 If you’ve ever been caught in a riptide, pulled down into the water, then you know me. Or, more accurately, what I’m like when I’m angry.Delia was beautiful, smart, and kind. He wasn’t. He said he loved her, but he didn’t know what love was. He was manipulative and cruel—more than a thief. A beast.All she wanted was a rose… These are the words on my sister’s grave. Her sadness, her obsession, forever a reminder I didn’t–couldn’t save her.I’m not vindictive or cruel. I’m simply as the river–my memory is winding and my reach is long. I watched him steal her beauty, her essence. Watched him become a beast. He thought he’d get away with it, thought he’d go free.I lay a rose upon my sister’s grave.Light a candle for the beast.

If you are willing to leave an honest review between the dates of November 26th and December 10th, you are eligible to enter.
How? Simply fill out the form!

You have until Midnight of November 15th when three winners will be chosen by random drawing.
Thanks so much & best of luck!